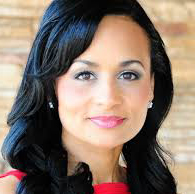 Katrina Pierson was the National Campaign Spokesperson for the 2016 Donald J. Trump for President Campaign. She was appointed as Senior Advisor to the President-elect’s transition team and is currently a Senior Advisor for President Trump’s re-election campaign after representing America First Policies, the non-profit organization formed by former Trump campaign staff to remain active in legislative efforts outside the White House. Katrina served as a board member for the Dallas Tea Party, founder of the Garland Tea Party, ran a Congressional campaign, and is currently the owner of Pierson Consulting Group. Ms. Pierson is a communications and public relations consultant who has represented political campaigns, multi-million dollar superPACs, and non-profit organizations.

She is well known as a political analyst and media contributor on a wide range of issues including politics, state and federal budgets, civil liberties, community organizing, and health care. As a former talk radio host, her opinionated personality has dominated new media. She has shared the stage with top conservatives including Andrew Breitbart, Senator Jim Demint, Senator Rand Paul, former House Speaker Newt Gingrich, and President Donald J Trump.

Katrina has appeared regularly on the Fox News and Business Channel, CNN, and across all major cable news networks including the CNBC, BBC, OAN, and MSNBC. She has been quoted in nearly every national newspaper and in several international outlets including China, London, Switzerland and Germany. Katrina has also appeared in a reality television series on WeTV.

Katrina was awarded by the 83rd Texas Legislature with Senate Resolution 1064 for her local, state, and national accomplishments within the political landscape. She is a sought after speaker for political events, high schools, universities, grassroots events, and key note speeches for a wide range of organizations. She is a featured panelist on policy discussions for various organizations around the country. She was featured in D Magazines “Person of Interest” May 2014 and ranked 19th on PR Week’s power list.

Katrina’s background is in the health care industry. She holds a Bachelor’s degree in Biology from the University of Texas at Dallas. She currently resides in Texas and Washington, DC.