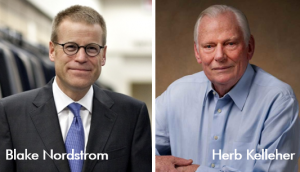 Over the last several decades, I’ve been fortunate to attend more business conferences than I can remember. No matter the location, profession, industry or seniority of attendees, when the names Nordstrom or Southwest Airlines appear on stage, all eyes and ears come to attention.

Large companies have an incredible capacity to capture our imagination. When they bring value to customers through meaningful innovation, provide purpose, meaning and dignity to employees, and fuse all of this with strong corporate character, they can become icons that guide the world to a better place.

Within one day of each other last week, both companies suffered sad losses with the passing of Blake Nordstrom, one of Nordstrom’s co-presidents, and Herb Kelleher, a co-founder and former chairman & CEO of Southwest Airlines. Their deaths caused me to reflect on the special characteristics of two very special men and the companies they helped shape.

While volumes could be – and have been – written about both, they share a few traits I especially admire.

First, both companies have a remarkable reputation for customer service, which starts with their cultures. While their legendary customer service is something we’ve likely all discussed at a dinner party, data bears it out. In 2018, Nordstrom topped Market Force’s Customer Loyalty Index among fashion retailers for the sixth consecutive year, and for the past two years in a row, Southwest Airlines has topped J.D. Power’s Customer Satisfaction rankings for low-cost carriers. In each case, their reputations for outstanding customer service start internally with cultures built on trust, safety and respect. Herb Kelleher himself perfectly illuminated this principle:

“If the employees come first, then they’re happy…. A motivated employee treats the customer well. The customer is happy so they keep coming back, which pleases the shareholders. It’s not one of the enduring green mysteries of all time, it is just the way it works.”

Just as Southwest built its success from the inside out under Herb’s guidance, from its early days, Nordstrom has focused on cultivating a sense of co-ownership and culture of mutual respect. Blake Nordstrom himself described their approach:

“We want all employees to feel like it’s their name on the door and they are empowered to do whatever it takes to serve the customer on their terms. Our open door policy is connected to the idea that we have a stake in this together.  It’s up to each of us to play our role in delivering the best experience for the customer.”

Their approach has worked. Nordstrom is one of only twelve companies – and is the only fashion company – that has been recognized as one of the 100 Best Companies to Work For 20 years in a row. Michael Bush, the CEO of Great Places to Work, described the company as a “work legend” and said the following: “Nordstrom has done the hard work of creating, maintaining and improving a culture that puts people at the center. And they have reaped the business advantages that come with high-trust workplace relationships.”

Second, both companies’ secrets to success are deeply woven into their DNA. While Herb Kelleher left his post as Southwest’s CEO nearly 20 years ago, and Nordstrom was already almost a century old when Blake Nordstrom took its helm, in different ways, both companies have proven bigger than any one person: They are built to last. That’s because neither man constructed a cult of one personality, but rather embedded their companies’ ethos into the fabric of their organization. In manners both visible and invisible – from symbols to systems to communications to leadership behaviors – neither Nordstrom nor Southwest Airlines’ success have existed in their executives’ shadows. The companies are complex, self-sustaining ecosystems that are poised to thrive for generations to come. Again, Herb Kelleher put it well: “The core of our success. That’s the most difficult thing for a competitor to imitate. They can buy all the physical things. The things you can’t buy are dedication, devotion, loyalty—the feeling that you are participating in a crusade.”

Finally, I’ll end by saying that throughout these days of mourning, the words spoken about both Blake Nordstrom and Herb Kelleher reflect their kindness, spirit and devotion to their employees, not the wealth they generated for themselves or shareholders. Both men seemed acutely aware of the privilege and responsibility that comes with running iconic companies and understood that their ultimate legacy was bigger than their bottom lines. That’s why they so often stepped over quick bucks to invest in their people and communities, to build companies worthy of their lofty aspirations. As Herb again put it: “A company is stronger if it is bound by love rather than by fear.”